The purpose of member of the week is to recognize exceptional dedication and hard work. 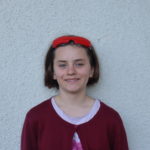 Cecile, from Coding, A first-year member, was able to complete the entire code for the demo bot in a short amount of time. She also dedicated extra time to learn Java quickly.

Zachary, from coding, a first-year member, steeped up and completed the entire code for sensor bot very quickly. He is a dedicated member who took it upon himself to quickly learn Java.

Daniel, from Electrical, a first-year member, has shown particular dedication and initiative in his work. He has been working in his own time to finish his given tasks and has been completing them exceptionally well.

Samuel, from Programming, a first-year member (who previously participated in robotics at another club),  has been taking on several extra responsibilities. He stood in as Programming Lead during the strike and has programmed a vision tracking camera that will help us drive the robot during the Sandstorm.

Nadine, from Administration, a first-year member, has been working on the business plan, website blog and gallery, sponsorship emails and calls, budgeting, and parent communication. She has been attending every meeting since build season and taking on many extra tasks.

Jameson, from Mechanical, a second-year member, has been hard at work on CAD models, claw prototypes, and building mechanisms. He continued his work outside of meeting times and surpassed his given tasks remarkably. With his work, we were able to move on to the assembly of the chassis and claw.